Statistics: Glossary
Analysis of variance (ANOVA). A form of linear model with a continuous outcome variable and categorical input variables.

Autoregressive model. A model for a time dependent outcome variable which in which the error term includes past values of itself

Binary variable. A variable which can take only two values, say 'success' and 'failure'

Binomial distribution. The distribution of a binary variable when the probability of a 'success' is constant.

Cluster randomised trial. A trial in which the subjects are randomised in clusters.

Confidence Interval. A 95% confidence interval displays the degree of uncertainty about the population parameter provided by the sample estimate

Deviance A measure of how far a set of data varies from a perfect fit to a model. For Normally distributed residuals it is equal to the residual sum of squares.

Effect modification Given a model between in an input variable and an outcome, effect modification occurs if the observed relationship is changed markedly when a third variable is included in the model. An extreme example of this is Simpson'sparadox.

Fixed effect. A term in a model that can be fitted using dummy variables. The assumption is that if a new set of data were to be collected, the population parameter would be the same (fixed). Thus the effect of an intervention in atrial is assumed fixed.

Funnel plot. A plot used in meta analysis to try and detect publication bias. It comprises a plot of the precision of estimates of treatment effects from component studies versus the estimate itself.

Generalised Estimating Equations (GEE) A set of equations for estimating parameters in a model, essentially equal to iteratively re-weighted least squares. They are commonly used with a sandwich estimator to obtain thestandard error. There is also GEE2 includes the variance estimators in the set of equations.

Hazard Ratio (Relative Hazard): Hazard ratio compares two groups differing in treatments or prognostic variables etc. If the hazard ratio is 2.0, then the rate of failure in one group is twice the rate in the other group. Can be interpretedas a relative risk.

Hosmer-Lemeshow statistic. A measure of the goodness of fit of a logistic regression when at least one of the explanatory variables is continuous.

Influential points. In regression analysis, points which, if deleted and the model refitted, would have a big effect on at least one of the model parameters.

Kaplan-Meier plot. An empirical plot of the probability of survival on the y axis by survival time on the x-axis. Censored observations can be incorporated in the plot.

Least-squares. A method of estimating parameters in a model when the outcome is continuous. It chooses parameters which minimise the residual sum of squares.

Leverage points: In regression analysis, observations that have an extreme value on one or more explanatory variable. The leverage values indicate whether or not X values for a given observation are outlying (far from the main bodyof the data). They may be influential points

Likelihood: The probability of a set of observations given a model. If the model has a single parameter θ, it is denoted P(X| θ), where X denotes the data.

Likelihood ratio test: A general purpose test of model M0 against an alternative M1 where M0 is contained within M1. It is based on the ratio of two likelihood functions one derived from each of Hoand H1. The statistics -2 ln (LM0 / LM1) has approximately a χ2 distribution with df equal to the difference in the number of parameters in the two models.

Linear model A model which is linear in the parameters, but not necessarily in the variables. Thus y=β0+β1X+ β2X2 is a linear model but y=exp(β0+β1X)is not


Logistic regression. Used to analyse data where the outcome variable is binary. It uses the logistic transform of the expected probability of 'success'.

Maximum likelihood. A method of fitting a model by choosing parameters that maximises the likelihood of the data.

Meta-analysis. A method of combining results from different studies to produce a overall summary statistic, usually in clinical trials.

Multiple linear regression. Often just known as multiple regression. Used to analyse data when the outcome is continuous and the model is linear.

•For comparing two samples the assumption under the null hypothesis is that they both came from the same population
•type 1 error: occurs when null hypothesis is true and wrongly rejected, i.e. conclude significant difference exists when in reality doesn't
•type 2 error: occurs when null hypothesis is wrongly accepted when false, i.e. missing a true difference
NNT: Number Needed to Treat. An estimate of number of patients that would need to be treated under a new treatment for one more of them to achieve the desired outcome than under the standard treatment

Example NNT 1.2 ~ for Helicobacter eradication, NNT 40 for preventing death with aspirin after MI
NNH: Number Needed to Harm. Number of patients that a physician would have to treat with a new treatment to harm one extra patient who would otherwise have not been harmed. Harm may be an adverse reaction, or treatment failure, death etc.

Ordinal variable. A categorical variable, where the categories can be ordered, such as pain scores of 'mild', 'moderate' and 'severe'.

Ordinal regression. Used to analyse data when the outcome variable is ordinal. Usually uses the proportional odds model or the continuation ratio model.

Overdispersion. In a Poisson and Binomial model, the variance of the outcome is determined by the mean value. When the observed value exceeds this predicted value, the data are said to be overdispersed. This can happen when the counts arecorrelated.

Proportional hazards model (also known as the Cox model).Used to analyse survival data. The main assumption is if an explanatory variable is binary, then the hazard ratio for this variable is constant over time.

Poisson distribution. The distribution of a count variable when the probability of an event is constant.

Poisson regression. Used to analyze data when the outcome variable is a count.

Power. The Power of a test is the probability of declaring a result significant when the null hypothesis is false. It is denoted by 1- β

PPV is the probability that a subject who tests positive will be a true positive i.e. has the disease and is correctly classified i.e. how good the test is at finding people with disease in screening situation, prevalence is small & PPV low.

NPV is the probability that a subject who is test negative will be a true negative i.e. someone. doesn't have disease and is correctly classified... how good a test is at identifying people without disease

PPV & NPV both depend on prevalence of disease, sensitivity & specificity
where 2X2 table values are: 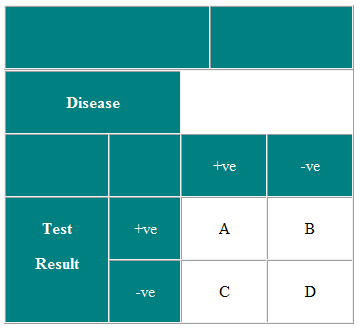 Publication bias A phenomenon when some studies which have been conducted fail to be published. It usually occurs because studies that have positive findings are more likely to be written up and submitted for publication, and editors aremore likely to accept them

•calculate using significance test
•P •P > 0.05: result not statistically significant. Two groups are not significantly different and chance can not be excluded as potential explanation of association
Random effects model. A model with more than one random (or error) term. The assumption is that if the study was done again, the terms would estimate different population parameters, in contrast to a fixed effects model. Thus in alongitudinal study, the effect of a patient on the intervention effect is assumed random.

Robust standard error. Also known as a sandwich estimator. A method of estimating standard errors of parameters without assuming the error variances are homogenous.

Sandwich estimator A robust standard error, so-called because the matrix formulation is like a 'sandwich' ABA, where A is the 'bread' and B the 'filling'.

Score test. A measure of the fit of a set of parameters to a model, based of the slope of the likelihood of the data of model at the null point.

Stepwise regression. Used to decide which of a set of explanatory variables best describes the outcome. Also includes step-up and step-down regression where variables are progressively added or subtracted from the model

Time series regression. Regression in which the outcome variable is time dependent

•A type I error occurs when the null hypothesis is rejected when it is true. A type I error rate is the expected probability of making a type I error,and this should be decided before collecting data. It is essentially the expected false positive rate of the test and is often denoted by α.
•To understand a type II error rate we need to understand the concept of an alternative hypothesis. For a clinical trial this is the amount we would expect to see if the treatment worked, or the amount that would be 'clinically significant' (or the amount by which we would be persuaded to change treatments). For an epidemiological study it is the change in (say) relative risk for someone exposed to a hazard.
•A type two error occurs when a study fails to reject a null hypothesis when it is false, i.e. the alterative hypothesis is true. A type two error rate is essentially a false negative rate, and is often denoted by β.
Wald test. A measure of the fit of a parameter of a model based on the estimate of the parameter divided by its estimated standard error.