You will learn about commonly used epidemiological measurements to describe the occurrence of disease. This section covers:

Measures of disease frequency including:

Measures of effect including:

The essence of epidemiology is to measure disease occurrence and make comparisons between population groups. The current section introduces the commonly used measures that help our understanding of the distribution of disease in a given population.

A principal role of epidemiology is to describe and explain differences in the distribution of disease or other health outcomes of interest between populations.

Examples of health outcomes measured in epidemiological studies include:

Measures of disease frequency are used to describe how common an illness (or other health event) is with reference to the size of the population (the population at risk) and a measure of time.

There are two main measures of disease frequency:

Prevalence measures the proportion of individuals in a defined population that have a disease or other health outcomes of interest at a specified point in time (point prevalence) or during a specified period of time (period prevalence).

The prevalence of hypertension among women in town A on this date is calculated as:

In contrast to prevalence, incidence is a measure of the number of new cases of a disease (or other health outcome of interest) that develops in a population at risk during a specified time period.

There are two main measures of incidence:

Risk is the proportion of individuals in a population (initially free of disease) who develop the disease within a specified time interval. Incidence risk is expressed as a percentage (or if small as per 1000 persons).

The incidence risk assumes that the entire population at risk at the beginning of the study period has been followed for the specified time period for the development of the outcome under investigation. However, in a cohort study participants may be lost during follow-up.

For example, some participants may:

To account for these variations during follow up, a more precise measure can be calculated, the incidence rate .

Incidence rates also measure the frequency of new cases of disease in a population. However, incidence rates take into account the sum of the time that each person remained under observation and at risk of developing the outcome under investigation.

3. Calculation of person-time at risk

The denominator in an incidence rate is the sum of each individual's time at risk and is commonly expressed in person years at risk.

The incidence rate is the rate of contracting the disease among those still at risk. When a study subject develops the disease, dies or leaves the study they are no longer at risk and will no longer contribute person-time units at risk. 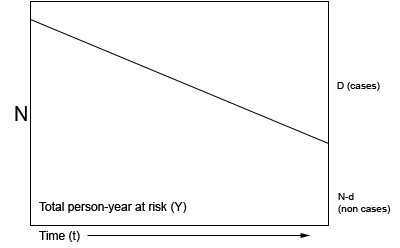 Figure 2: Person-time (years) at risk for 5 individuals in a hypothetical cohort study between 2000-2004. 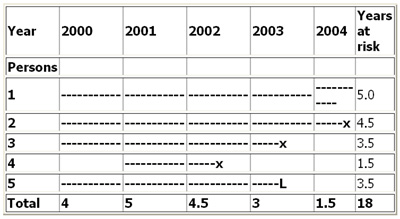 Figure 2 illustrates the calculation of person-time units (years) at risk of a hypothetical population of 5 individuals in a 5 year cohort study. In the above example the incidence rate for disease (X) is calculated as:

Note that for most rare diseases, risks and rates are numerically similar because the number at risk will approximately equal the total population at all times.

4. Issues in defining the population at risk

5. The relationship between prevalence and incidence

The proportion of the population that has a disease at a point in time (prevalence) and the rate of occurrence of new disease during a period of time (incidence) are closely related [1].

For example, if the incidence of a disease is low but the duration of disease (i.e. until recovery or death) is long, the prevalence will be high relative to the incidence. For example diseases like leprosy or tuberculosis tend to persist for a longer duration, from months to years, hence the prevalence (old and new cases) would be longer than the incidence.

Conversely, if the incidence of a disease is high and the duration of the disease is short, the prevalence will be low relative to the incidence [1]. For example, acute conditions like diarrhoea have a relatively short duration (a few days).

A change in the duration of a disease, for example the development of a new treatment which prevents death but does not result in a cure will lead to an increase in prevalence. Fatal diseases or diseases from which a rapid recovery is common have a low prevalence, whereas diseases with a low incidence may have a high prevalence if they are incurable but rarely fatal and have a long duration.

The relationship between incidence and prevalence can be expressed as:

A population in which the numbers of people with and without the disease remain stable is known as a steady-state population. In such (theoretical) circumstances, the point prevalence of disease is approximately equal to the product of the incidence rate and the mean duration of disease (i.e. length of time from diagnosis to recovery or death), providing that prevalence is less than about 0.11.

That is Prevalence = Incidence x Duration

As a result, when two of the measures are known, the third can be calculated by substitution.

6. Other commonly used measures of disease frequency in epidemiology 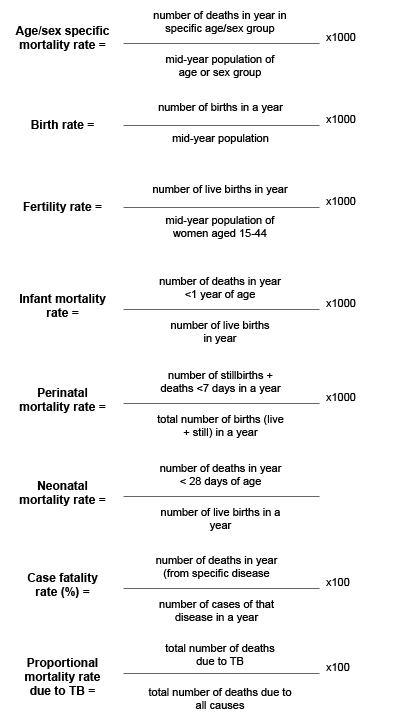 This comparison can be summarized by calculating either the ratio of measures of disease frequency for the two groups or the difference between the two, and reflects the increase in frequency of disease in one population compared with another, treated as baseline.

The relative risk is a measure of the strength of an association between an exposure and disease and can be used to assess whether a valid observed association is likely to be causal [1].

The most commonly used measure of effect is the ratio of incidence rates that is:

Example: There are 10 times more lung cancers in smokers than in non smokers (Rate Ratio = 10)

A relative risk of 1.0 - indicates that the incidence of disease in the exposed and unexposed groups is identical and that there is no association observed between the disease and risk factor/exposure.