Management and Change: Critical Evaluation of a range of principles and frameworks for managing change

Change is now considered to be the biggest challenge for virtually all organisations, public and private, large and small - but especially for large, well established 'complex adaptive' organisations. Change is everywhere and the rate and pace of it is almost universally reckoned to be increasing.

Several 'gurus' (including Tom Peters and Charles Handy) and academics (notably Colin Carnall author of several books on Managing Change) have drawn attention to the 'challenges of change'.

In a changing world the only constant is change.' Carnall C.1995:

The NHS is a very large organisation - the fifth largest employer in the world  and largest in Europe.

The meaning of change and the different types of change are discussed further in Appendix 1.

Change and resistance to change

There is a paper mountain of advice on reforms, restructuring and managing change. Yet many behaviours do not change.
The puzzle is why the NHS has been so unchanging, given the barrage of attempts to 'reform' it'.

'Alongside remarkable stability in the espoused purpose of the NHS there has been almost constant structural change.'

Mullins (2005) argues that change is an inevitable part of organisational life.  Organisational change can mean many things from small tweaks to services to wholesale changes to the wider health and social care system.

In general employees are cast as being resistant to change, although some enjoy changes if they can see the benefits.  The resistance to change is generally due to suspicion of what the future may hold.  Disgruntled employees may be openly resistant to change or non co-operative, but both can have significant impact on the implementation of the change.

Making change can be complex and change needs careful planning.

Pollitt (1993) and Dawson (1999) suggest that the health systems are characterised by three defining features:

Health systems are highly complex, employing people with a wide range of talents, perspectives and passions. They have many different cultures and norms, arising from a number of factors including:

It is also important to remember that cause and effect relationships may not be easily apparent, and that an intervention in any part of a health care organisation will have outcomes in many others, not all of them anticipated, and not all of them desirable.

These are covered in detail in the additional resources on Change Management.

There are a number of models for successfully managing change.

A structured process for professional/organisational planned change, to Successfully Managing of Change

a)    Use a PEST or PESTELI analysis

'Sources and potency of forces'

In their book Organisational Transitions: Managing Complex Change (1987) Beckhard and Harris describe and illustrate two techniques for analysing relevant sources of energy. They analyse respectively the 'sources and potency of forces for change', and the 'readiness and capability' of individuals and group to enact change.

First, the nature of the change demanded must be specified, using tools of the sort described in previous sections. Then all forces for change, both inside the organisation and external to it, are listed along one axis of a grid. On the other axis the potency of the forces is indicated, as high, medium or low.

Use
The grid is useful for clarifying the underlying forces for change. On occasion, as Beckhard and Harris point out, the energy for change emanates from one particular senior manager, rather than from a variety of environmental sources such as demographic change and new technologies. They observe that this does not invalidate the change objectives but clarifies where the energy will have to come from in the ensuing change programme.

Commentary
Whereas Lewin's analysis is used to diagnose and plan interventions, this is more useful as a vehicle for discussion among key opinion formers at an early point in the change process, to ensure that everybody is aware of the need for change.

Description
Early on in the change process, managers need to identify which specific groups and individuals will be required to support change if the change is to be successful. When they have done so they can determine the readiness and capability of these individuals and groups to enact the roles required of them in the change process. Understanding the readiness involves analysing attitudes: willingness, motives and aims. Capability is determined by whether they have the power, the influence and the authority to allocate resources, and the appropriate information and skills. Beckhard and Harris (1987) have developed a Readiness-Capability Assessment Chart which enables the user to list individuals or groups who are critical to the change effort, and to rank them (high, medium, or low) each according to their readiness and capability with respect to change.

Use
In health care organisation's power is derived from a number of different sources and is not easy to identify as in other industries. In any change management process the location of power and the use to which it will be put needs to be known by those attempting to lead the process and this tool is, among other things, a means of finding out its location.

Commentary
Any change agent or senior manager in a health care setting will intuitively undertake an analysis of this sort. This chart helps bring it into the open, permits assumptions to be tested and information shared and this increases the validity of the information available to the change agent. 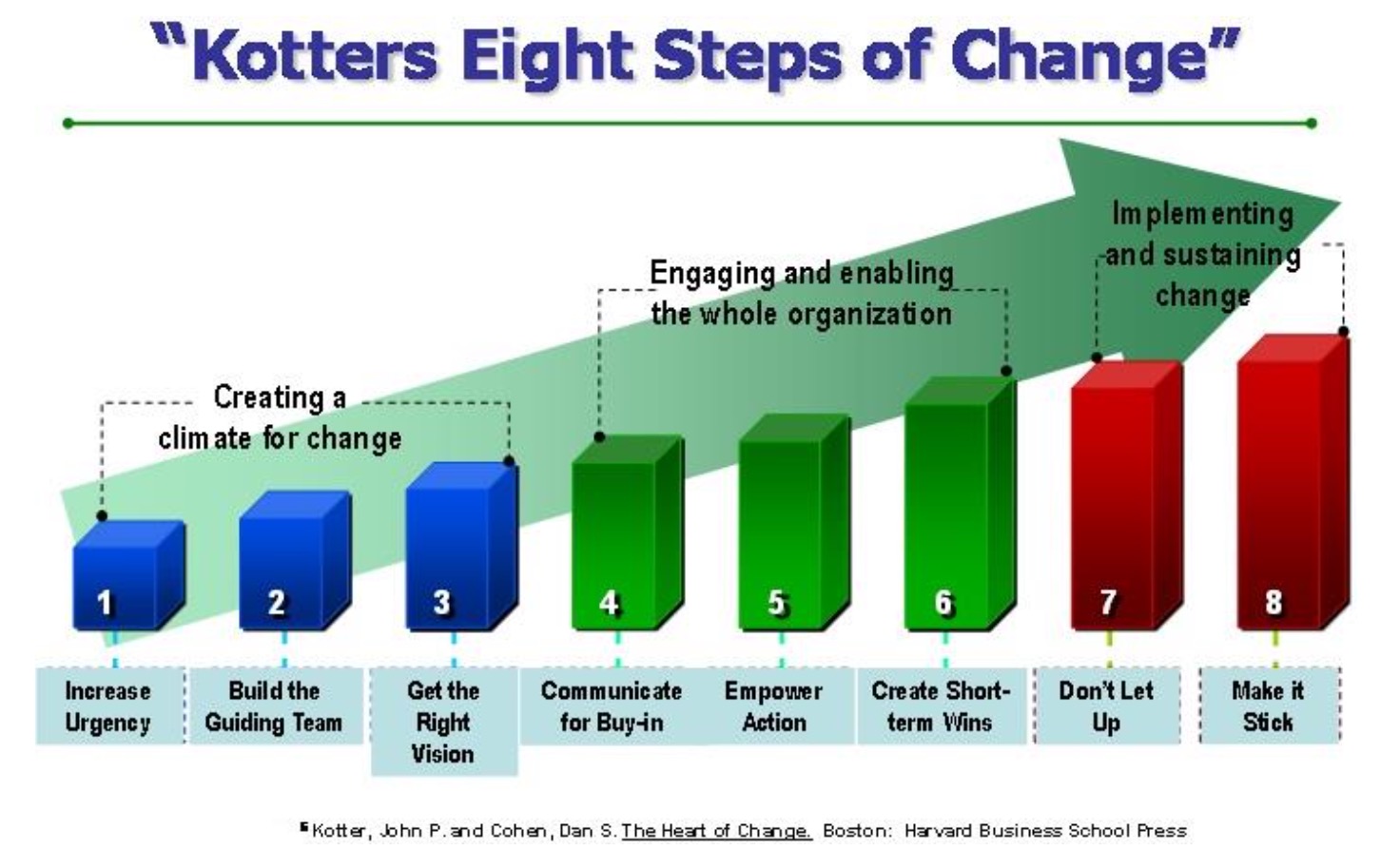 Increase Urgency: This indicates that employees need to see the reason for change, e.g. patients are unhappy.
Build the guiding team: This involves getting the right team together.
Get the right vision: In order to inspire you need to create a compelling vision that can be shared in a few minutes.
Communicate for buy in: This step includes appropriate levels of communication and gaining buy in.
Empower action: Remove barriers, build confidence and optimism for the change.
Create short term wins: This provides short term validation of the change, encourages those who are participating and shines a light in the right direction for those considering joining in.
Don’t let up: Now is the time to change the structures to support the change.
Make it stick: This is what is different from many other change management theories. Cultural change happens at the end of the process naturally and the change is adopted.

The following extracts are developed from 'Organisational Change: A review for health care managers, professionals and researchers.'

What is meant by 'change'?

This appendix describes and reviews a range of approaches, models and tools which managers and practitioners may be interested to learn more about as part of understanding and managing change. key terms and concepts in the literature are described. These will demonstrate the diversity of thinking and activity encompassed by the single term 'change'.

Change can be emergent rather than planned in two ways:

Another distinction is between episodic and continuous change. Episodic Change (often also referred to as 'Step' change) according to Weick and Quinn (1999), is 'infrequent, discontinuous and intentional'. Sometimes termed 'radical' or 'second order' change, episodic change often involves replacement of one strategy or programme with another.

Continuous change, in contrast, is 'ongoing, evolving and cumulative' (Weick and Quinn, 1999). Also referred to as 'first order' or 'incremental' change, continuous change is characterised by people constantly adapting and editing ideas they acquire from different sources. At a collective level these continuous adjustments made simultaneously across units can create substantial change.

The distinction between episodic (or step) and continuous (incremental) change helps clarify thinking about an organisation's future development and evolution in relation to its long term goals.

Few organisations are in a position to decide unilaterally that they will adopt an exclusively continuous change approach. They can, however, capitalise upon many of the principles of continuous change by engendering the flexibility to accommodate and experiment with everyday contingencies, breakdowns, exceptions, opportunities and unintended consequences that punctuate organisational life (Orlikowski, 1996).

Change can also be understood in relation to its extent and scope. Ackerman (1997) has distinguished between three types of change: developmental, transitional and transformational.

Schein in 1987 further explored these three stages. He suggested that unfreezing involves:

Moving to a new position is achieved through cognitive restructuring, often through:

Refreezing occurs when the new point of view is integrated into:

3.  Transformational change is radical or second order in nature. It requires a shift in assumptions made by the organisation and its members. 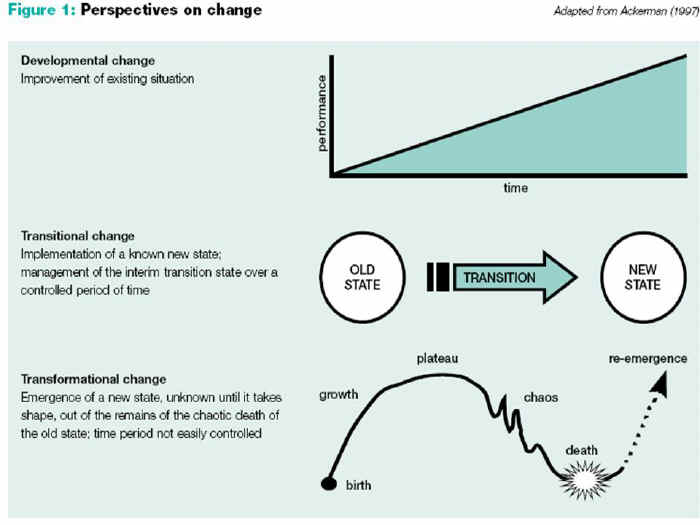 Many of the approaches to organisational change found in the literature give the impression that change is (or can be) a rational, controlled, and orderly process.

Accordingly, change can be understood in relation to the complex dynamic systems within which change takes place.

Systems thinking originated in the 1920s within several disciplines, notably biology and engineering, and grew out of the observation that there were many aspects which scientific analysis could not explore. Whereas scientific method - summarised by Popper (1972) as the three Rs: reduction, repeatability and refutation - increases our knowledge and understanding by breaking things.

A system is a set of elements connected together which form a whole, thereby possessing properties of the whole rather than of its component parts (Checkland, 1981). Activity within a system is the result of the influence of one element on another. This influence is called feedback and can be positive (amplifying) or negative (balancing) in nature. Systems are not chains of linear cause-and-effect relationships but complex networks of interrelationships (Senge, 1990). Systems are described as closed or open. Closed systems are completely autonomous and independent of what is going on around them. Open systems exchange materials, energy and information with their environment. The systems of interest in managing change can all be characterised as open systems. In terms of understanding organisations, systems thinking suggests that issues, events, forces and incidents should not be viewed as isolated phenomena but seen as interconnected, interdependent components of a complex entity. Applied to change management, systems theory highlights the following points.

Within the health and social care system the term whole systems thinking is now routinely used by managers and clinicians. This widespread usage reflects an increase in:

Largely for these reasons we have drawn on insights from systems thinking - as well as on other concepts discussed in this section - to help organise the groupings of change management models in Part 2 and to highlight the interrelationships between these.

Source: Managing Change in the NHS 2001.

There are a plethora of books on 'managing change'.  In the linked PowerPoint modules we have relied on the following:

References are provided at the end of each PowerPoint module

Beyond these we recommend a number of Booklets in a series, 'Managing Change in the NHS' published from May 2001.

All these, especially the NHS booklets, include a wide range of tools and techniques.

Here, below, is a summary of the main areas covered and the tools explained in 'Making Informed Decisions on Change' and 'Developing Change Management Skills'

Other change management authors have developed models and tools which analyse forces for and against change. (See, for example: Kanter, 1983; Beckhard and Harris, 1987; Nadler and Tushman, 1989; Kanter, Stein and Jick, 1992.) We describe two such tools below: 'sources and potency of forces' and 'readiness and capability'.

There remains a number of articles on line from the former Institute and Improvement on Change Management which are specific to managing change in the NHS.