The following module concerning social networks and communities of interest
is divided into three discrete parts:

Social network: is a social structure made of individuals or organisations that are tied by one or more specific types of interdependency, such as values, visions, ideas, financial exchange, friendship, and also dislike, conflict or trade. In its simplest form, a social network is a map of all of the relevant relationships and actors being studied. The network can also be used to determine the social capital of individual actors.

Social network analysis views social relationships in terms of the individual actors within the networks, and the relationships between the actors.

The connections within and between social networks is referred to as social capital which is a social science concept used in business, economics, organisational behaviour, political science, public health and sociology.

Community: a specific group of people who all hold something in common. Community has tended to be associated with two key aspects: firstly people who share locality or geographical place; secondly people who are communities of interest.

Community capacity building: activities, resources and support that strengthen the skills and abilities of people and community groups to take effective action and leading roles in the development of their communities and to engage with public bodies.

Community engagement: the process of working collaboratively with and through groups of people affiliated by geographic proximity, special interest, or similar situations to address issues affecting the well-being of those people.

Communities of Practice (CoP) These are groups of people who share a concern or a passion for something they do and learn how to do it better as they interact regularly. The difference between a ‘community of interest’ and a ’community of practice’ is that members of a community of practice are practitioners.

Community sector: the web of personal relationships, groups, networks, traditions and patterns of behaviour that exist amongst those who share physical neighbourhoods, socio-economic conditions or common understandings and interests.

Social networking has encouraged new ways to communicate and share information and are beginning to be adopted by healthcare professionals. They are a means to:

Research in a number of academic fields has shown that social networks operate on many levels, from families up to the level of nations, and play a critical role in determining the way problems are solved, organisations are run, and the degree to which individuals succeed in achieving their goals. They tend to share the core idea "that social networks have value.

Just as a screwdriver (physical capital) or a college education (humancapital) can increase productivity (both individual and collective), so do social contacts affect the productivity of individuals and groups".

Recent work on community cohesion and integration has also emphasised the complexity of individual identity. People can identify with each other by experiences they have in common, based on values, life-style, consumption, social class, gender – a whole range of interlocking and fluid drivers of identity.

For councils and other service providers at the local level to really engage with their residents and customers, they need to understand how complex personal identities can influence the way in which individuals want to engage in civic life and in shaping local decisions. Communications or engagement based solely on areas or neighbourhoods may not be meaningful for everybody. Thinking about people not only in terms of where they live but through their “communities of interest” can provide a richer vein of engagement and encourage greater
participation in local life.

Such approaches can be especially relevant for communities who might otherwise find it difficult to influence decisions, including ethnic minority groups, people with disabilities and the lesbian and gay community. The point here is not about reinforcing divisions but about encouraging greater active participation in local decisions and community life as a first step to broader ‘bridging’ between different communities (DCLG, 2008). Part of building trust at the local level is also about linking empowerment to a wider process of learning and accepting the complex and the long-term nature of the task at hand. Community development workers can also be a source of local knowledge and assist in understanding community needs, demands and interests. It is also worth mentioning here the development of communities of practice (DCLG, 2009).

The concept of community of practice is influencing theory and practice in many domains. From humble beginnings in apprenticeship studies, the concept was grabbed by businesses interested in knowledge management and has progressively found its way into other sectors. It has now become the foundation of a perspective on knowing and learning that informs efforts to create learning systems in various sectors and at various levels of scale, from local communities, to single organisations, partnerships, cities, regions, and the entire world.

The importance of the CoP is the accumulation and sharing of knowledge. Thus the practice of a community is perceived as dynamic and involves learning on the part of everyone. Social scientists have used versions of this developing concept of community of practice for a variety of analytical purposes, but the origin and primary use of the concept has been in learning theory.

For orientations of learning check out this website:  http://www.infed.org/biblio/b-learn.htm

Andrée le May draws on the complexity of Wenger’s social theory of learning, reflected in the figure below and uses this framework to consider what structures of the CoPs are, how they direct or not the behaviour of the CoP’s members, how power is dealt with and what meaning is created and what the collective function is (see le May 2009).

Figure 1: The conceptual underpinnings of Wenger’s theory of social learning in Communities of Practice (le May 2009:7) 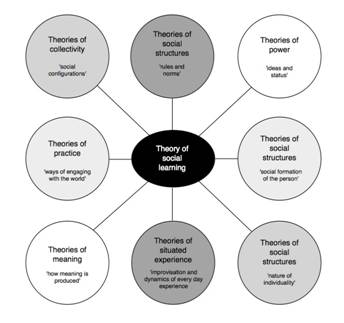 Social networking websites are being used regularly by millions of people. The main types of social networking services are those which contain category divisions (such as former school-year or classmates), means to connect with friends (usually with self-description pages) and a recommendation system linked to trust. Popular methods now combine many of these, with Facebook widely used worldwide; MySpace, Twitter and LinkedIn being the most widely used in North America.

A new trend is emerging with social networks created to help its members with various physical and mental ailments e.g. for people suffering from life altering diseases, particular sites offer its members the chance to connect with others dealing with similar issues and research patient data related to their condition.

Despite the many successes of modern medicine, there are a number of health issues including chronic low back pain, depression and obesity that are poorly understood resulting in a lack of consensus on how they should be tackled. Although biological causal mechanisms certainly contribute to these conditions, there is substantial evidence that psychological, social and environmental aspects of these health issues are also important. Established models of clinical practice include taking account of biological, psychological and social aspects of health. However, there is little understanding of how poor health emerges from interaction between these different aspects of life over time and so how best to intervene. Social science research indicates the importance of social relationships for health. However, analysing the influences of such networks on health poses a number of challenges of a data access, computational and statistical nature.

The prevalence of obesity has increased substantially over the past 30 years. Research into a social network of 12,067 people assessed repeatedly from 1971 to 2003, as part of the Framingham Heart Study, demonstrated that network phenomena appeared to be relevant to the biologic and behavioural trait of obesity, with obesity appearing to spread through social ties. (See Christakis N, 2007):

When groups of people from different areas and backgrounds get together to solve problems that affect them all they are termed “community of interest”.  They work together to learn from each other and help each other think of solutions everybody can use to make things better in their own areas.

The value in this form of community is in their ability to help each other to do things better or quicker or cheaper than they could do if each person worked on their own. The more energy and excitement they have the more quickly their problems get solved. People get to know each other and talk to each other, although they might not even meet face to face or work together every day. Some might be at every single event, some might only come to one. Some might already know a lot about the problem, others might know nothing, but these people can still help the rest of the group by saying what they think about ideas or passing on what they have learned to other people they know.

As a member of a community of interest individuals may:

"…Several of the Council’s Scrutiny Commissions make provisions for co-opted members. In this way they can involve people with particular interests and skills. The council’s equalities forums are represented on certain Commissions and are able to directly engage with the work of the Commission…. As a consequence of this engagement, we have seen progression from equalities forums and co-opteeship, to people getting engaged in other forms of civic engagement, including becoming councillors or school governors or using this experience to become employees in the public sector”.

Communities of practice are not called that in all organisations. They are known under various names, such as learning networks, thematic groups, or tech clubs. In fact, communities of practice are everywhere. They are a familiar experience, so familiar perhaps that it often escapes our attention and they come in a variety of forms. The concept of community of practice has found a number of practical applications in business, organisational design, government, education, professional associations, development projects, and civic life. Table 2 provides some examples of where Communities of Practice is applied.

Le May’s commentary on the recent interest in researching CoPs can also be considered in relation to communities of interest in focusing upon how knowledge is shared, how learning occurs and how this learning impacts on the development of those involved (Andree le May, Communities of Practice in Health and Social Care 2009:118).

Table 2: The application of Communities of Practice (adapted from http://wenger-trayner.com/)