Learning objectives: You will learn about the international and national classifications that are used for coding data and the strengths and weaknesses for using these classifications.

Classifications of diseases and medical care, which are applicable over a number of settings and countries, enable comparisons and benchmarking which would otherwise not be possible.

The international standard classification of disease is the International Classification of Diseases (ICD), published by the World Health Organisation. It is periodically updated; the current version is ICD-10, which was implemented in 1994, and is beginning to show its age. The ICD is divided into a series of chapters, such as II, neoplasms, or IV, Endocrine, nutritional and metabolic diseases. In the 10th revision, each individual disease is given a unique alpha numeric code. For example, cancer of the stomach is C16, which can be subdivided more precisely (C16.2 is cancer of the body of the stomach).

ICD is used to classify diseases and other health problems recorded on many types of health and vital records, including death certificates and hospital records. In addition to enabling the storage and retrieval of diagnostic information for clinical and epidemiological purposes, these records also provide the basis for the compilation of national mortality and morbidity statistics by WHO Member States. In the UK it is used within the NHS when capturing diagnosis information in hospitals, and is an important part of the identification of Healthcare Related Groups (HRGs), used for resource management and payment of providers.

Another method of classification is the American Psychiatric Association's (APA) Diagnostic and Statistical Manual of Mental Disorders (DSM), which is the primary diagnostic system for psychiatric and psychological disorders within the United States, and is used as an adjunct diagnostic system in many other countries. Since the 1990s, the APA and WHO have worked to bring the DSM and the relevant sections of ICD into concordance, but some small differences remain.

The International Classification of Functioning, Disability and Health (ICF) describes health and health-related domains as body functions and structures, activities and participation. Because an individual's functioning and disability occur in a context, ICF includes a list of physical, social, attitudinal and environmental factors. Domains are classified by body, individual and societal perspectives. The classification places emphasis on function rather than condition or disease. It is designed to be applicable across cultures, age groups and gender, making ICF the basis for collecting reliable and comparable data on health outcomes for individuals and populations.

The World Health Assembly approved ICF in May 2001 after a decade-long international revision process involving 65 different countries. ICF is designed for better, more uniform data for research and analysis. It will eventually be implemented worldwide, meaning that health and disability can be described and measured more effectively, and that the impact of these conditions can be monitored.

Datasets that utilise international classification systems enable comparability across countries in the collection, processing, classification, and presentation of these statistics. However, new or emerging diseases are not easily included without a major revision. Each revision may lead to problems interpreting trend data.

Classifications used in the NHS

There are three types of classification which may be relevant for data collection and analysis. These are Read Codes, PPCS 4 code, and healthcare resource groups (HRGs). 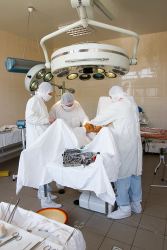 Read codes, or Clinical Terms, were developed initially for use in primary care. They have a hierarchical structure describing the care and treatment of patients, including diagnosis, symptoms, tests and other interventions, and can (mostly) be mapped to ICD10 and OPCS4. However, they have not generally been found easily usable at hospital levels, they are not always unique for a particular presenting condition (depending on the hierarchical sequence followed to arrive at the final code), and their ethnic categories do not correspond with those used elsewhere. Though they formed a major plank of an earlier NHS Information Strategy, they have not taken the place they were expected to.

SNOMED (Systematic Nomenclature of Medicine) is similar to Read Codes but is more widely used in the US. A major project to combine SNOMED with the UK Read codes to form SNOMED-CT has not proved as successful as anticipated.

The Office of Populations, Census and Surveys (as it formerly was, before becoming part of the Office of National Statistics) produced classifications of operative interventions known as OPCS 4. Within the UK these are standard codes used in hospital datasets to record surgical interventions. Along with ICD10 codes, they are used to derive HRG codes. The most recent release is OPCS4, which dates from the 1980s and is recognised as in need of revision. However, there has as yet been no consensus as to the best form of replacement. SNOMED-CT was expected to do this, however this has not taken place to date.

The third type of classification is an NHS development of the US system of Diagnostic Related Groups (DRGs). DRGs are used for payment of hospitals by health insurance organisations, and HRGs are used by the NHS to set standard reimbursements for care carried out. HRGs are intended to group cases of similar clinical character and similar resource use, and as such can be a valuable tool for healthcare analysts concerned with appropriate targeting and utilisation of NHS resources. They are regularly reviewed and updated, and are currently (2007-8) at version 4. For more information, see the Information Centre: Casemix.