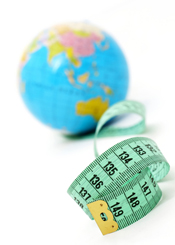 Learning objectives: you will learn about the following concepts:

One important method of assessing the health of a population is to ask how long people can expect to live. Life expectancy, usually reported at birth, although it can be applied to other ages as well, is a commonly used summary measure that can also be used to compare across countries. Life expectancy is calculated using life tables.

A life table is a table which shows, for a person at each age, what the probability is of them dying before their next birthday. From this starting point, a number of statistics can be derived and are also included in the table:

Life tables are usually constructed separately for men and for women because of their substantially different mortality rates. The Office of National Statistics is one organisation which produces life tables.

Age specific mortality rates are applied to a notional population, typically of 100,000 (an example is the European Standard population). Starting at birth, the probability of dying in each period is applied to the number of people surviving to enter that period, so that the initial figure slowly reduces to zero.

Table 1: The different elements required for a life table include (using standard notations).

This sort of life table is based on current age-specific death rates for each age or age band used and are called 'period life tables' and are the most frequently used type. In contrast, actual life expectancy of a particular birth cohort can only be calculated when everyone in this cohort is dead. This is called a 'cohort life table' and requires data over many years to prepare just a single complete cohort life table.

An example of how a life table can be constructed and the mathematics involved can be downloaded from the simple interactive statistical analysis website.

It does not say much about who is still alive, and their quality of life; for example, how many years are lived with disability before dying. This has led to attempts to bring together morbidity and mortality, with measures such as Health Adjusted Life Expectancy and Disability Adjusted Life Years.

Other characteristics can also be used to distinguish different risk factors for life expectancy, such as smoking-status, occupation, socio-economic class, and others. More complex analyses for assessing cancer survival, that involve comparisons between two populations or a population at two points in time can also be undertaken.

When used in biology, age specific fertility rates are also included in the calculations.

When data have not been available, such as in low income countries, life tables have been modelled using what data are available, usually childhood mortality data.

HALE is a measure of population health that takes into account mortality and morbidity. It adjusts overall life expectancy by the amount of time lived in less than perfect health. This is calculated by subtracting from the life expectancy a figure which is the number of years lived with disability multiplied by a weighting to represent the effect of the disability.

A+fB = healthy life expectancy, where f is a weighting to reflect disability level.

N.B. This raises many moral questions about who defines and measures disability level and how they do it.

Conversely, DALYs measure the amount of life lost in a population as a result of premature death or disability. They can be used to estimate the burden of disease on populations. DALYs were used in the Global Burden of Disease study to enable mortality and morbidity comparisons to be made across countries. Weightings were applied to conditions by using the time trade off approach, in which people were asked to consider living more years in imperfect health compared with fewer years in perfect health. The study also placed more weight on the life of a young adult compared with a newborn.

A formula to calculate a DALY is available at the World Health Organisation.

A measure related to HALE and DALY, this measure attempts to quantify the potential years of life lost by looking at average age of death from conditions compared to average life expectancy. PYLL can be expressed absolutely or as a rate relative to the population at risk.

The calculation for Potential Years of Life Lost (PYLL) involves adding up deaths due to a particular cause or multiple causes, at each age and multiplying this with the number of remaining years to live up to a selected age limit. The limit of 70 years is frequently chosen (sometimes 65 is chosen).