Learning objectives: You will learn about the historical changes in populations, including underlying factors which may contribute to these variations.

Changes in population size are subject to a number of influences. Among these are natural fertility, social attitudes to fertility and reproduction, sustainability in terms of food and nutrition, war, outbreaks of disease, public hygiene and sanitation, healthcare developments and mass migration. While it is known that some or all of these have affected the population of the UK over the centuries, reliable figures for both total population, and age and sex structure, have only been available since 1801, when the first Census was held in Great Britain.

Each individual (or couple) in a population can be assumed to have the same probability of reproduction during their fertile years, so the growth rate of the population is proportional to the population's size. This is known as exponential growth. During the 200+ years for which reliable data is available, this has not been the case in Britain. In England, population growth has been effectively linear, averaging about 2 million extra people each decade, and implying progressively lower fertility over the period. In Wales the position is similar, though having peaked in 1921 the total fell over the next two decades before resuming the increase. In Scotland, growth seems to have been linear until 1921; since then the total has remained almost static.

The start of the period at the beginning of the nineteenth century coincides with the beginning of the Industrial Revolution, with major changes in agricultural practice (eg. enclosure) and improvements in agricultural productivity leading to a more reliable food supply. Overall, male life expectancy was just below 40, female just above. On the other hand, conditions in industrial mills were appalling: male life expectancy of Lancashire mill workers was 17, that of miners estimated at 25. Infant mortality was very high. The population in this period was concentrated in the young age bands. Both birth rates and death rates were high, but between 1801 and 1851 the population of England approximately doubled, from 9 Million to 18 Million people. An additional factor towards the end of this period was Irish immigration, during the 1846-48 great potato famine.

During the second half of the nineteenth century, adult and older child mortality rates fell, largely because of improved nutrition and sanitation (sewerage etc), cleaner water supplies, and the introduction of smallpox vaccination. However, infant mortality remained high. Fertility, as measured by the average number of children per woman, fell by more than half between 1870 and 1920, as natural methods of contraception became more widely accepted within marriage. Subsequent improvements in contraceptive technology, and changing social attitudes, have meant that more recently birth rates have continued to fall.

The middle nineteenth to the early twentieth century was the age of the great colonial settlement, and there was net outward migration from the UK throughout this period. Around three quarters of a million young men were killed in the 1914-8 war, and over 150,000 people of all ages died in the UK in the subsequent influenza epidemic. Infant mortality declined in the first half of the twentieth century, largely because of changes in public health and childcare practices. Childhood mortality overall has greatly reduced since the mid-twentieth century, largely as a result of immunisation programmes, which have rendered small pox extinct, reduced polio, diphtheria, and whooping cough to shadows of their former threat, and are steadily reducing other childhood diseases such as measles, mumps and rubella.

Tuberculosis, previously a major cause of death, began to decline during the nineteenth century, even before effective therapies became available, and since the advent of antibiotics around the late 1940s has been a minor issue, though the recent development of drug-resistant varieties may herald a resurgence. In general, infectious diseases, which used to account for the majority of early deaths, have ceased to be a major determinant of populations in the developed world, and have been replaced by cancers and cardiovascular disease, illnesses that are closely related to old age. Deaths in childbirth have also reduced since antibiotics became available.

Figure 1: Cavitation right upper lobe in a patient with tuberculosis 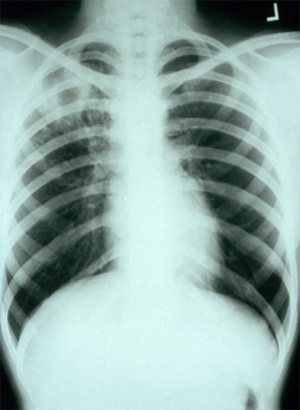 Since the 1950s, the UK has experienced high levels of immigration, which has led to a change in the ethnic composition of the population. Some groups may have their own specific health needs. They also tend to have higher birth rates (sometimes for cultural, sometimes for religious reasons). Minority ethnic groups tend to congregate in urban centres, and while the overall national proportion of ethnic minorities is around 7%, in some cities in the Midlands they form a local majority of the population, and several London Boroughs have high levels of ethnic minorities (almost 30% of London's population are from a minority ethnic background).

As mortality rates have fallen, and with the advent of more and more effective medical treatments, life expectancy has risen, to around 78 for men and 84 for women, about double the expectation in 1801. Combining this with lower childbirth rates, widespread use of contraception, and easily available abortion, so that the number of births barely keeps pace with the number of deaths, and we get a picture of an overall aging population, with more and more people living beyond their retirement age. Among the elderly, women far outnumber men. Demand for health services rises rapidly in old age, and the demography implies a continuous increase in health care resources. Retired people, like ethnic groups, often live in the same communities, especially at coastal resorts. Several local authorities along the southern coast of England have very high proportions of their populations that are retired. This can lead to unexpected pockets of deprivation, as the retired population may be capital-rich but income poor, as their pensions may be fixed and small. Correspondingly, populations in inner London boroughs show the opposite trend, with high numbers of younger working-age adults who are income rich but capital poor, and low numbers of elderly.